In my last post, I talked about taking Jesus literally when he tells us to sell everything and give to the poor.  One frustration that I have with the Christian American Dream is that sometimes we are urged, albeit unknowingly, to “hide behind your giving.”

Let me explain: Some people think that giving lots of money excuses them from actively engaging in God’s mission.  I know that my heart can be susceptible to this. Americanized Christianity tells us that if we write a check every other week, then we are the senders, we are the givers, we are the ones who don’t have to get our hands dirty because we pay others to do it for us.

But what I see in Biblical Christianity is quite different. People who give are still called to get their hands dirty. People who give should still engage in God’s mission with their neighbors, their family and friends, their coworkers, and the pagan culture around them. If we trust in Jesus as Lord, then we are supposed to be on his mission, not ours. This doesn’t always mean going overseas of course. It means doing it in your city, your church, your workplace, your neighborhood, and your home.

In order to do this, we cannot accumulate money and possessions and call it “blessing.”  When we make money, we give it away. When we get stuff, we share with others and sometimes even give those things away. But we never seek to accumulate. And we never give so we can say, “I give; they are sent.”  Jesus said, “Go and make disciples” (Matt. 28:19), and Paul reminded us of Jesus’ words, “It is more blessed to give than to receive” (Acts 20:35). This means everyone.

Let’s not hide behind our giving. We are all sent. And Christianity will never be biblical until we embrace that.

The critical question for our generation — and for every generation — is this: If you could have heaven, with no sickness, and with all the friends you ever had on earth, and all the food you ever liked, and all the leisure activities you ever enjoyed, and all the natural beauties your ever saw, all the physical pleasures you ever tasted, and no human conflict or any natural disasters, could you be satisfied with heaven, if Christ was not there?

– John Piper, God Is the Gospel

My friend Chuck Bergen (who blogs at Writing on the Walls) and I have launched a new blog called the (un)gospel.  Don’t let the title fool you.  It’s not heretical.  Anything but.

The blog’s driving force is preaching against prosperity.  We want to counter the false, demonic prosperity with the true gospel of Jesus Christ.  In the simplest terms, it’s a blog about Jesus and money.  Here’s an excerpt of the about page:

As far as we know, there isn’t one central place on the internet where Christians can find resources about the dangers of the prosperity gospel.  We want this to be that place.  We want to advance the true gospel and preach against the false gospel of health, wealth, and comfort.  We want this blog to not only inform people, we want God to use it to transform people so that Jesus will become the supreme treasure of their lives.

We want one thing to be clear: we don’t hate money.  Money is a very good thing, and we work hard to make money (albeit not much). Our hope is that God will use this blog to help people use money in a way that shows Jesus is infinitely valuable, not money.

While Chuck finishes up exams at RTS and I prepare for my wedding (and start a job — more on that later), the posts will be sparse.  However, after the New Year, things will really get rolling.

Here’s a video from Christianity Today about the prosperity gospel in Africa.

(If you are viewing this in a feed reader, you may have to click through to the blog to see the video.)

Oh no. He’s refuting my sermon points before I even speak.  Jesus, there’s either going to be radical transformation today, or I’m going to be chased to my car.  I shouldn’t have worn flip-flops.

Those were my thoughts as the service began this morning at my friend Lordwick’s church here in a South African township, when John, the “emcee,” was up front.  He excitedly talked about enjoying a prosperous life as a Christian.   At one point he said, “If you are in trouble, if you are suffering, there is something wrong with you.  You need to get close to God.”

The demonic prosperity gospel has an enormous stronghold here in Africa. I wanted to confront it head-on.  I wanted God to do a mighty work and reveal the true nature of the gospel.  I knew that because of what I was going to say, suffering could come my way.

While I sat and listened to John’s pre-sermon ‘sermon’ and the loud, keyboard-driven praise music, I prayed that God would come with power to preach boldly — even if the message would be unpopular.  I prayed for transformation.  And by God’s grace, I think we saw the beginning of transformation by the time we were done.

Let me be honest: after the service, I tried to avoid John.  But he found me (it wasn’t hard, there were only about 40 people, and more than half were children).  He grabbed me and shook my hand and said, “James, you have opened my eyes up to something I didn’t know about.  I thought when I have Jesus, the money should flow in.  But I realize that I wasn’t believing the real gospel.  Your message, it was the real gospel.”  I was floored.  All I could say to him was, “Praise God.”  I gave my manuscript to John, and over lunch, we talked about getting him more resources that will help him be shaped by the real gospel.

With this response, God answered my prayer.  All week I had been praying that God would open people’s eyes to see.  I can’t do that.  Yet, that is exactly what God told Paul to do in Acts 26:18, “I am sending you to open their eyes.”  How can we do this impossible thing? It is only by God’s grace that he works through us.  Anything is possible with him.  He is the one who says, “Let light shine!” (2 Cor. 4:6). And he did today.  In fact, he’s doing it everyday.

Thanks to Rylan for the pictures!  Preaching with a translator is never easy (this was my second time).  It’s difficult to get in rhythm because I have to speak very simply (he’s not a professional translator) and sentence-by-sentence.  But by the end though, Lordwick and I started to feed off each other.  Listen to or read the message. 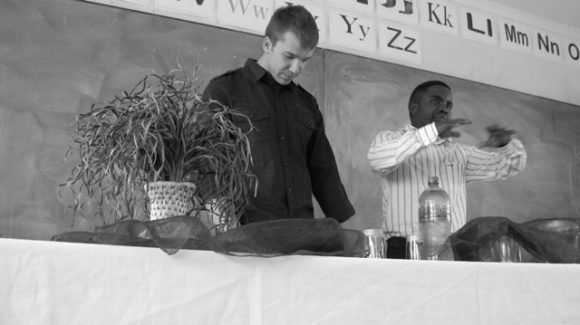 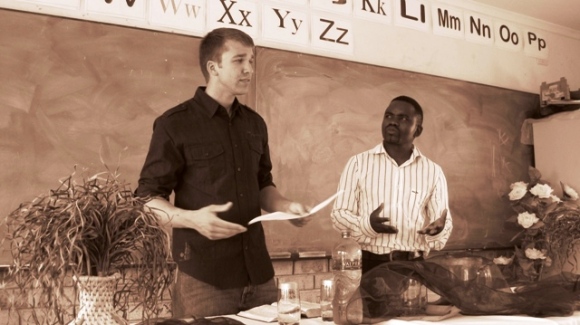